The Rioja Alta Wine Route is in La Rioja’s wine-producing area par excellence. It is here that the region’s wine culture was mainly developed and where its most prestigious wines come from. But there are two other elements that contribute to making its scenery incomparable. One is the richness and diversity of its historical and artistic heritage, reflecting La Rioja’s previous role as crossing of ways and frontier land. The other is an environment and landscape characterised by its vineyards but looking towards the Toloño, Cantabria and Demanda mountains, and of course the Ebre River. And to top it all, the hospitality of the towns of La Rioja and their people. 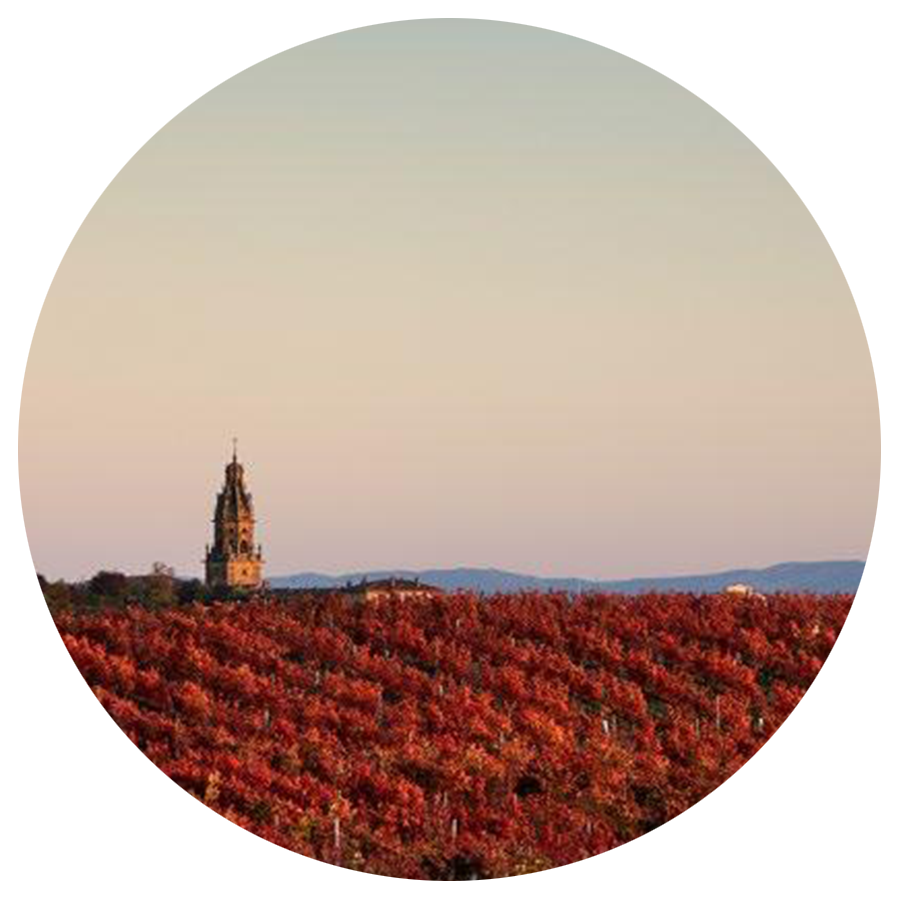 A land of age-old wineries.

Rioja Alta is the region’s wine making area par excellence. The towns along the Route stock every possible type of wine, whether created in the major wineries, some of them over one hundred years old, or in small wine producers that still retain their underground cellars in the winery districts so characteristic of those towns. So young, aged, reserve, claret and white wines start appearing as you tour the area’s wineries and wine shops. Some towns specialise in certain types of wine. San Asensio, for example, is the “birthplace of claret”; you will find prestigious young, aged and reserve wines; and exquisite white wines are produced, some of them barrel-fermented.

Tradition and technology in the production of their delicious wines

On the Rioja Alta Wine Route dozens of centuries-old wineries combine tradition and technology in the production of their delicious wines. You’ll also find nationally-known restaurants, museums and interpretation centres, charming rural hotels and houses and welcoming inns, all set in marvellous countryside where the Ebre Valley converges with the lower reaches and estuaries of the Najerilla, Tirón and Oja Rivers, making your stay in this wine-growers’ paradise a unique and unrepeatable experience.

The diversity and richness of the historical and artistic heritage of Rioja Alta is only a pale reflection of the passage of history through La Rioja. From dolmens, indicating the presence of prehistoric settlements in the area, to imposing Baroque churches, Rioja Alta reveals the different layers of our history. All architectural and artistic styles are represented on the Rioja Alta Wine Route, creating an overall view encompassing everything from Romanesque hermitages to castles and fortresses, not to mention the monasteries and churches that mark the horizon.

For example, the hundreds of patron saints’ festivals and “romerías” (religious processions) in many of its towns. Of particular interest is the Romería of the Hermitage of Davalillo in San Asensio on the first Sunday after Resurrection Sunday.

Also in San Asensio, on 25 July the hold the Battle of Claret. This entails locals and visitors engaging in an entertaining dispute during which 30,000 litres of wine are thrown around, soaking anyone who happens to be passing at the time.

In June Briones holds its Mediaeval Days, giving you the opportunity to take a journey back in time through themed portals and ancestral houses and demonstrations of ancient trades.

Lastly in August you have the Sajazarra Festival of Ancient Music and the popular Nights of Saint Lawrence, during which the wineries in several areas hold open days and put on a range of entertainment.

Enjoying between restaurants, taverns and steakhouses

The magnificent restaurants, taverns and steakhouses of La Rioja Alta invite you to sample Rioja’s vegetables from the local fields on the day they’re harvested, and enjoy the mouth-watering aroma of a beef stew or try out the tasty Sarmiento baked chops.

The local Rioja-style cod and potatoes, “piquillo” peppers stuffed with meat, and the famous “pochas riojanas” (haricot beans) are other delicacies that you can find on this route.

And for dessert, will you really be strong enough to resist delicious marzipans or succulentpears in wine?

La Rioja Alta offers a total of 15 signed pathways covering the whole of the territory. This is the ideal way to get to know the region’s fantastic natural spaces and discover things like the spectacular views over the vine fields from the Sierra del Toloño mountains.

As well as these signed walks you can also take relaxing strolls through the wine fields and beside the groves and poplar trees that line the rivers. Or why not visit some of the many museums and interpretation centres, or take part in wine tastings, gastronomic days and degustation of typical local produce.

Located in Rioja Alta, in the northwest of La Rioja and a few tens of kilometres from Logroño, access by road is via the N–232 and the A–68, Cenicero and Haro exits. Most of the Route’s towns lie near one of these two roads which run parallel to the Ebre River. There is a railway station in Haro. Logroño has an airport.